For A Stress-Free Retirement, Focus Your Efforts On Debt Repayment Now 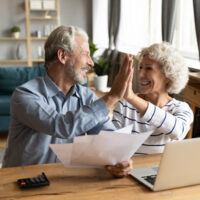 Hurricane shutters are expensive.  Another cockroach crawled under the door?  Not another hole in the patio screen!  And don’t even get started talking about the mortgage payments!  Home ownership has plenty of hassles, but for the annoyance your house causes you, there are dozens of people who can only wish that they had that problem.  A lot of people look toward retirement as a time when they will no longer be tied down to the responsibilities of childrearing, work, and homeownership.  Yes, you could sell your house and live in modestly priced rental homes starting now, even before you retire, but from an estate planning perspective, it is best to stay the course and pay off your mortgage.  According to a study by the Retirement Security Research Center at the Employee Benefit Research Institute, a mortgage-free house gives retirees a greater sense of financial security than any other asset or source of income.  To discuss the fun you can have in your golden years if you focus on paying down your mortgage while you are still working, contact an Orange County estate planning lawyer.

Pay Down Your Mortgage Now, and Enjoy Your Retirement Later

The Retirement Security Research Center study asked retirees to describe themselves as affluent, comfortable, average, just getting by, or struggling; it asked these retirees to identify their own financial situations and did not actually ask them to give the numerical value of their assets or debts.  The strongest predictor of whether a retiree considered himself or herself “affluent” or “comfortable” was that the retiree had owned a house where the mortgage was paid off or almost paid off.  Retirees in these groups also tended to have a guaranteed source of income, such as Social Security or a retirement pension.

Meanwhile, retirees who reported the highest levels of financial stress tended to rent instead of own their homes, and they also tended to have credit card debts and medical debts.  Some of these differences were likely due to the differences in income they had earned and job benefits they had received before retirement, as well as to their state of health, in other words, to factors beyond their control.  The study does show that, even if your newly empty nest feels like a financial burden now, it will be a source of financial freedom in the future.

Remember that estate planning is also about planning to enjoy your retirement.  A valuable asset like a paid off house can be a source of rental income that you can use for retirement fun and stability.  It’s better to put your extra income toward paying off your mortgage and other debts now so that, later, you can focus on being a fabulous and generous retiree.

If you need motivation to stick to working toward your debt repayment goals, an Orlando estate planning lawyer can help you strategize about all the ways you can pursue your own happiness and that of the people you love once your debt has been repaid.  Contact Gierach and Gierach, P.A. for help with your case.